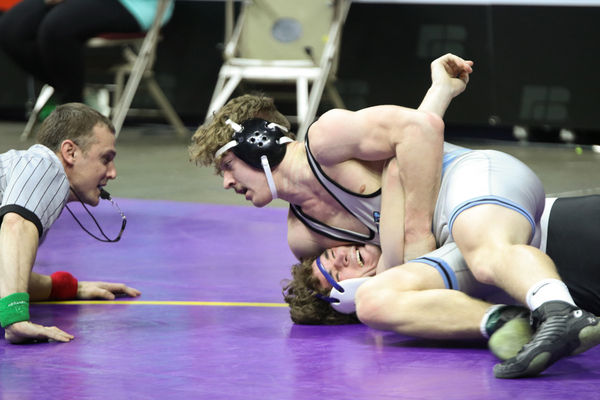 STC junior 182-pounder Payton Vest did not think the tournament would go the way it did. That’s because it went better than he expected. Vest along with fellow junior Brayden Smith and sophomore Logan Arp began their state wrestling journey at Wells Fargo Arena on Thursday, February 20.

In the very first round Vest faced Class 2A number one ranked Sage Walker of Eddyville-Blakesburg-Fremont. Walker pinned Vest (1:53) on his way to the 182 championship on Saturday.

“When you draw the first seed you don’t normally come out the way I came out,” said Vest, “I got on a roll and I really felt it. It felt good.”

As Vest’s road to the podium was threatened in his first match, he regrouped and won his next match, pinning Bradyn Barclay of Sargent Bluff-Luton (3:15) to stay alive on the consolation side of his bracket. 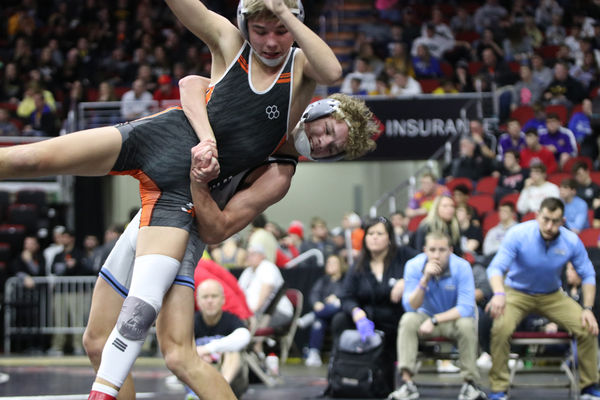 For some the atmosphere at The Well can get to a person but for Arp he felt comfortable because he has been wrestling at the arena in AAU from a young age.

“It’s what I expected,” said Arp, “I wrestled there a lot when a lot when I was little. I had a good time with Payton, Brayden and placing. I made my family proud.”

Arp, just like Vest, had to win his second match on Thursday to keep going and he did. Arp won by decision 7-1 over ninth ranked Evan Woods of West Delaware.

Unfortunately, the road ended for junior Brayden Smith on Thursday. Smith fell to Jared Voss of West Delaware (2:48) and also to Carter Bendorf of Harlan (1:55).

On Friday Vest and Arp continued their path to the podium. Vest pinned Cody Hall of Bondurant-Farrar (3:25) in consolation round 2 and Arp defeated Sam Nelson of Clear Lake 10-6. 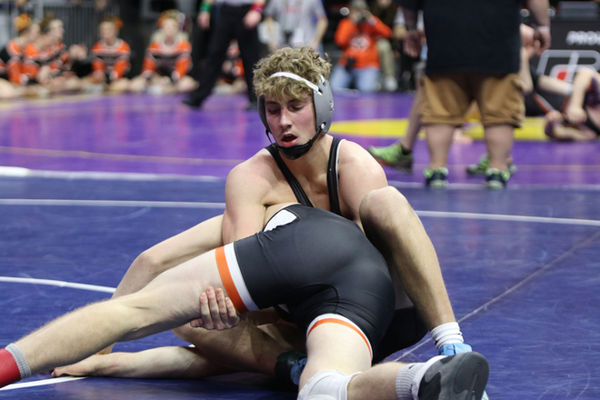 STC’s Brayden Smith falls to Jared Voss of West Delaware in the first round of state wrestling on Thursday, Feb. 20. Chronicle Photo/Allison Graham

“When you are going against a three seeded kid you really get nervous but for some reason I was so confident. That really helped me,” said Vest.

Vest said Neuhaus was controlling him but in a quick move Vest threw Neuhaus to the mat and pinned him (1:35).

“When he took me down I hit a little roll. My feet were out of bounds and I knew I had to get them in. I knew he was going to try and get them out. He got them out but his shoulder was still in so it was all still in bounds. I squeezed as hard as I could. He was screaming trying to fight. So much emotion came through my body. It felt so good,” said Vest. 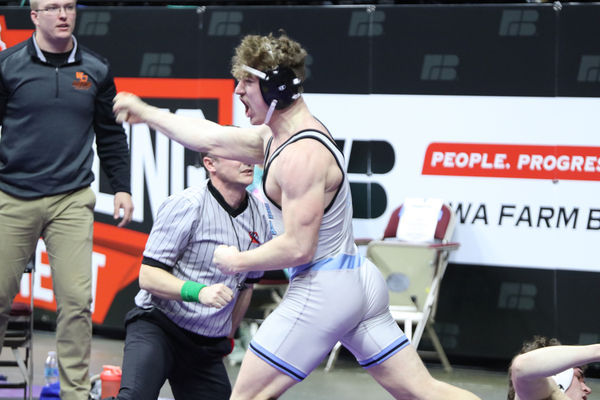 For Vest who went unranked all season and Arp who just hit the rankings from iawrestle.com on Feb. 11, the two had impressive first tournaments.

Arp has high expectations for himself going into next season.

“Next year I?want to get top three or even win it. I have confidence that I?can do that. I feel like I?could have done that this year if I?had worked a little harder. I?don’t think I?was expected to do as good as I?did. Next year I’ll expect a lot more out of myself,” said Arp.

Vest called the tournament really fun. “It was exciting. I did a lot of things I didn’t think or know I could do. I had a good time,” he said.

The season may be over but wrestling is never quite fully over. In fact, Arp and Vest were scheduled to help on Sunday with the home TWE tournament. 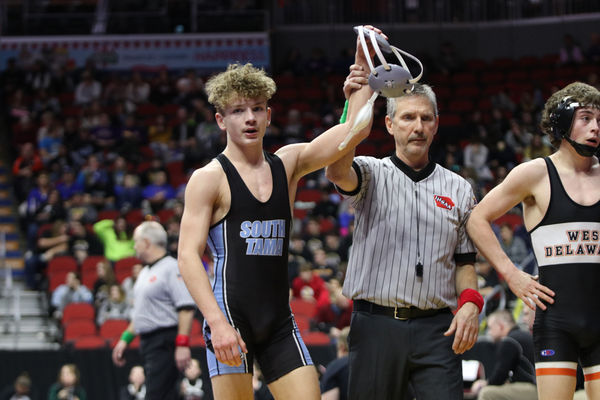 With all three of South Tama’s state qualifiers returning next year, the outlook for the future is bright. However, with the accomplishments that were earned this season comes an increased level of attention and expectations that could either propel the team forward or stand in their way.

Arp’s season ended at districts last year. This year to get to the podium he lifted a lot more.

“I was way more confident and mentally stronger. I don’t think I was necessarily a better wrestler but I?think I?matured in the sport,” said Arp.

“Expectations are higher now,” said Vest. “I can’t lose to the people I shouldn’t lose to next year. I just have to step it up.”

It also must be mentioned Vest was seen throughout the tournament donning a cowboy hat. Following his 4th place finish Vest also changed his twitter handle to “The Cowboy.” Did the persona give him a bit of an edge?

“I’m the cowboy. That’s all I can say really. I wanted to wear something so I wore a cowboy hat. Maybe it did give me a little something. It must have because I performed really well,” chuckled Vest.

STC’s Brayden Smith falls to Jared Voss of West Delaware in the first round of state wrestling on Thursday, Feb. 20. Chronicle Photo/Allison Graham 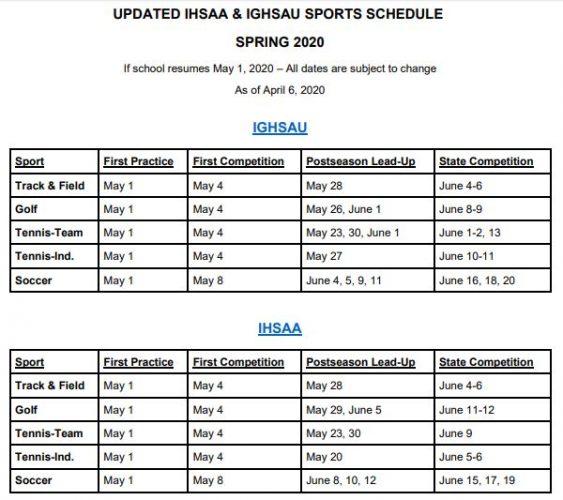 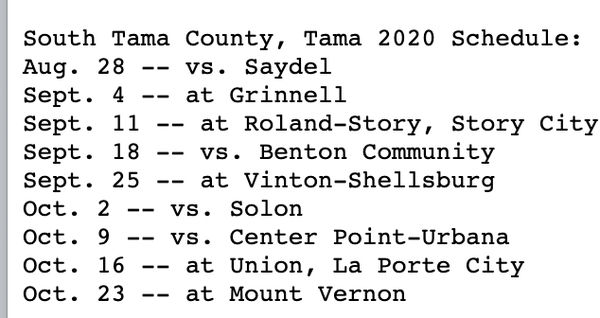 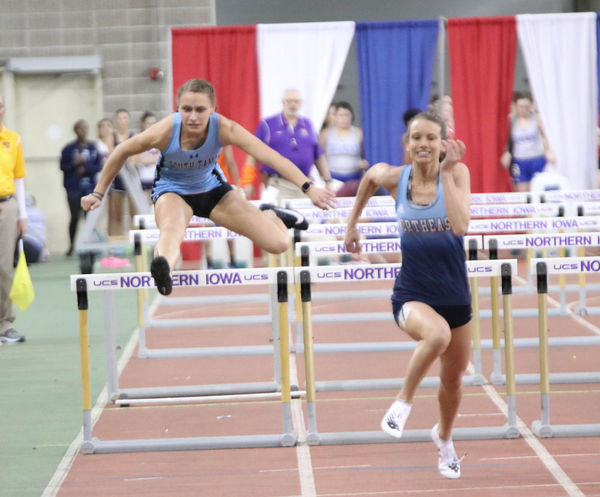 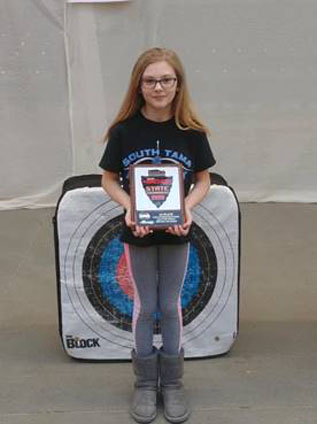 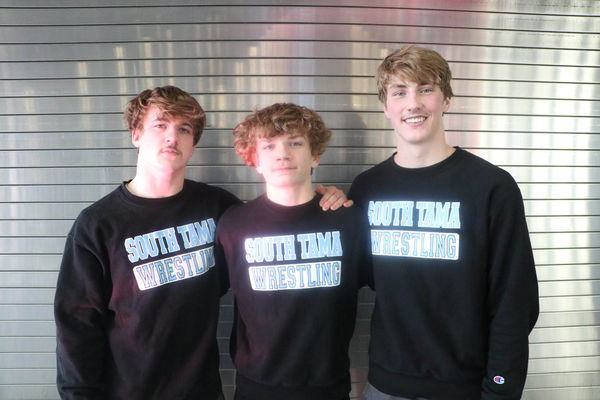 South Tama sends triple threat on to The Well